This paper attempts to analyze how materialist values mediate the relationship between time spent on social networking websites (SNW) and overall life satisfaction. Admittedly, younger generations spend more time on SNW compared to older generations, therefore we can anticipate that younger people are more affected by materialism and, consequently, less satisfied with their lives. The conceptual model proposed here was tested on a convenience sample of 390 Romanian adults. Using structural equation modeling, our findings validate the hypothesis that younger people spend more time on SNW; the SNW usage makes them more materialistic and, as a result, less satisfied with life. These findings raise ethical questions regarding the impact of SNW on overall life satisfaction. For example, Facebook, the most popular SNW in Romania, is a virtual social sphere where people become “friends”, give or receive “likes”, are “fans” of something or somebody, etc. Therefore, we argue that Facebook is a symbolical locus for quantitative manifestations of something intimate and private, like feelings or appreciations. Such materialist approach to friendship and relationships has a significant negative impact on life satisfaction. 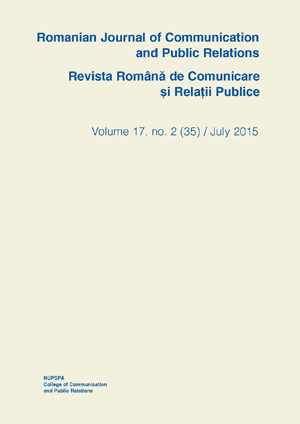 This work is licensed under a Creative Commons Attribution-NonCommercial 4.0 International License.

The Journal holds the rights to the articles it publishes. RJCPR uses a CC BY-NC license for published articles.

RJCPR is now seeking manuscripts for its upcoming issues: Guidelines for Authors.